In May 2021, the Federal Energy Regulatory Commission (FERC) approved Williams Transco’s request for a 2 year extension to build the Williams NESE Pipeline, over the objection of thousands of concerned New Yorkers and over 60 federal, state and city elected officials (link). Williams Transco has two more years to reapply to New York and New Jersey for Federal Clean Water Act Section 401 permits.

Keep updated with us here on our website, on Instagram at @surfridernyc, or sign up for our email newsletter at the bottom of this page. We will let you know if we hear any news.

The Williams Northeast Supply Enhancement (NESE) Pipeline is a proposed fracked gas pipeline planned by Williams Transco, an Oklahoma-based energy company with a poor safety record. It is proposed to run under the seafloor from New Jersey to Rockaway and connect with an existing pipeline, the Rockaway Lateral, which runs under Jacob Riis Park and Jamaica Bay in the Rockaways. The fracked gas will come from the Marsellus Shale region of New York and Pennsylvania. All of this would connect in Pennsylvania with another Williams pipeline, the 10,200-mile Transco Pipeline which begins in Texas.

This Williams NESE project would include: 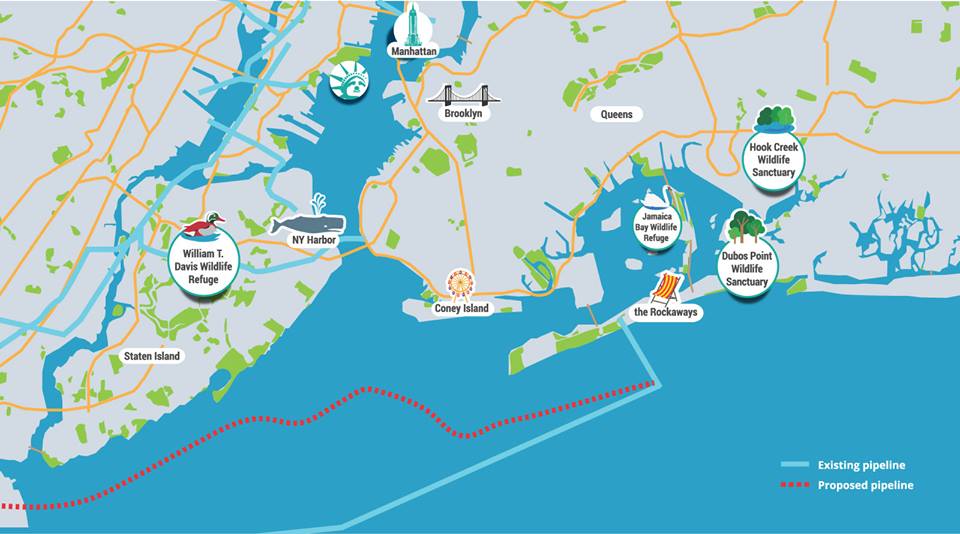 Why We Are Against the Williams Pipeline

This pipeline will take more than a year to build, including periods where work would proceed around the clock. Its installation will churn up arsenic, lead, DDT, and PCBs from the sea floor. The noise and vibration from construction will also be harmful to humpback whales, oysters, clams, and the Atlantic sturgeon, an endangered species.

Leaked fracked gas is essentially methane, a greenhouse gas that captures 84 times as much heat as carbon dioxide (link) in the initial 20 years after it is emitted. Building a new pipeline in areas ravaged by Superstorm Sandy is simply unconscionable. Hurricanes Harvey and Maria are horrifying reminders of the destructive force of storms in an age of warming temperatures. If we want to confront the threat of climate change, we must end our reliance on fossil fuels.

The Pipeline Undercuts State and City Promises on Climate

New York State is committed to a) getting 50% of its electricity from renewable sources by 2030 and b) New York City is committed to reducing greenhouse gas emissions to 80% below 2005 levels by 2050. A new pipeline to carry fracked gas would undermine these commitments.

Williams has a Poor Safety Record

Since 2008, ten Williams/Transco pipelines and compressor stations have exploded and/or caught fire (link). The US Pipeline and Hazardous Materials Safety Administration has repeatedly fined Williams for violations of safety procedures. New Yorkers will be the first responders, placed in serious danger, in the event of a fire or explosion.

There is No Need for Fracked Gas

Williams has not shown a need for this pipeline and there is no evidence that New York City is in need of more gas. We should be investing in renewable forms of energy, such as wind and solar, rather than dirty fossil fuels.

Williams says this project would cost $926.5 million to build. If demand for the additional gas fails to materialize, National Grid’s customers in Brooklyn, Queens, and Staten Island will be forced to pay for the project through higher rates.

Transco requests a two-year extension from FERC to build the pipeline.

On May 15, the DEC again denies the Clean Water Act Section 401 Water Quality Certification for the Williams pipeline.

The U.S. Army Corps of Engineers announces that Williams has applied to ocean dump contaminated sediment dredged from this project. The toxicity of this sediment, which includes copper and mercury, was a primary reason for the denial of the permit by the NYS DEC. The proposed dumping area is just 7.7 miles south of Rockaway Beach, the very waters that we swim and surf in.

On May 16, the NYS DEC issued a rejection of the water quality permit to the pipeline. This means the Williams Pipeline will not be moving forward at this time. The DEC provided a notice of their denial of the Williams Pipeline. The report focused on the disruption of sediments, which would pollute water quality and contaminate wildlife habitats. It also cited Williams for failing to provide the Department reasonable assurance of mitigating these impacts.

Over 500 citizens marched across the Brooklyn Bridge to show their opposition to the Williams Pipeline. They sent a message to Governor Cuomo that now is the time to take immediate action and revoke the permits for the Williams NESE pipeline. The march was led by youth and and indigenous partners.

On February 26 and March 6, the DEC held hearings to listen to the public’s comments on the Williams Pipeline. Representatives from Surfrider NYC, 350+ Brooklyn and others attended. Here's a look (video).

FERC released its FEIS (link) and greenlit the project.

Several statements have criticized the pipeline, not just for safety, but because New York is committed to decreasing its reliance on dirty energy and moving towards a greener approach.

FERC pushed back its release of the FEIS of the Williams Pipeline from September 2018 to January 2019. This is good news because it means a delay in construction and more time to rally the opposition.

At the All Borough Meeting at Brooklyn Commons, speakers representing environmental groups across New York as well as citizens stood up and spoke out against the Williams Pipeline. This open dialogue encouraged us to share our facts and helps get everyone on the same page.

Later in the month, over twenty volunteers went door-to-door at the Ocean Bay Projects in Rockaway to gather signatures to petition against the Williams Pipeline. The effort proved to be successful as word spread around to this already battered frontline community. 89 doors were knocked on and nearly 200 petition signatures obtained— plus great conversations were had with the residents, who clearly don’t want a pipeline built off of their beach.

Williams' application goes before the Federal Energy Regulatory Committee (FERC), which is expected to issue its Final Environmental Impact Statement (FEIS) in September 2018 and a decision on the pipeline in December 2018. FERC regulates all US electricity and natural gas sales.

FERC, in all likelihood, will approve this project. But the project can’t move forward without several state permits. In April, the New York State Department of Environmental Protection denied a water quality certificate for this project, but the denial was without prejudice and Williams has already re-applied. We are asking Governor Cuomo to deny Williams the needed water quality certificate on the merits with prejudice. Denying these permits would eliminate the risks that this pipeline poses to the health, safety, finances, and future of New Yorkers.

William's Pipeline hearing is held on April 26, where 87 citizens testify against the Williams Pipeline. (video)